Remington beard trimmers have had a long standing reputation of being some of the best trimmers on the market. For many men, finding the right trimmer that properly cuts the hair instead of pulling can be difficult. With the Remington MB-200 Mustache and Beard trimmer, you will have access to one of the best trimmers that will help you maintain your fresh and crisp beard lines. If this item is the next trimmer you are going to buy, what features does this unit have that you can look forward to?

With a retail price around $30, this unit is on par with a lot of other affordable beard trimmers on the market today. The unit was designed and constructed well and because of the name Remington, you know it will do its job for a long period of time. 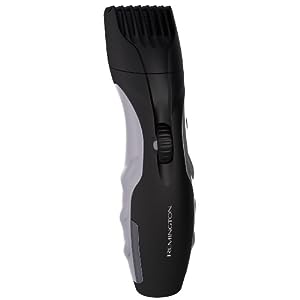 That construction of the trimmer included titanium coated and self-sharpening blades that are made to last for years without breaking down. There is no need to oil the blades like you would have to with other trimmers and with an attachment that features nine different lengths to trim your beard, you can turn your wild and crazy beard into something a little more suitable for the business world.

Those that designed the MB-200 understood the need to create something that wasn’t large and bulky, rather small and comfortable to hold. It has a rubberized handle that ensures you won’t slip it with a wet hand. The head is the only part of the device that can be washed, so don’t attempt to use this trimmer in the shower or it will break.

This set doesn’t have a dozen extras like other beard trimmers on the market, but what it loses out there, it makes up in other areas. The actual blade on the head has a wide range, allowing you to take off more hair with less runs across your face. It also comes with a detailing blade that will allow you to create the smallest of lines and designs with your trimmer. 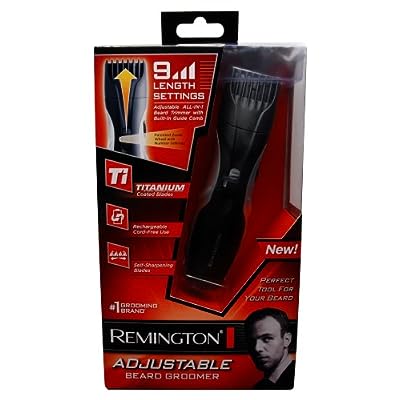 Overall, this unit has more pros than cons for deciding to make it your next trimmer. When you use the attachment, the size holds throughout the cut, meaning you won’t have a No. 6 cut on one side of your face a No. 4 on the other like some trimmers available. It also has a strong motor that ensures the blades cut through your hair instead of pulling them out of your skin. The battery, while not the newer lithium ion variety will hold a charge for you throughout an entire week vacation without needing to worry about packing the charger. With proper maintenance and protection, this is a trimmer that is meant to last for several years. After making such a small investment to purchase, you might have thought that it would only last you a year, but for some users, after four years of the MB-200, it still provides the same amazing cut now as it did before.

With the Remington MB-200, you are looking at the most basic model in their line, but it is still a model that is effective at removing all the hair you desire. It can be used cordless or while charging with the cord. It has a basic battery with a charging light to show you when it is low and when it is at its maximum.

A lot of beard trimmer kits are meant to give you the illusion of being better than they are. They give you dozens of attachments to make you think their product quality is better than others, but in the end, when it comes to the unit itself and a single attachment, the MB-200 blows away the competition.